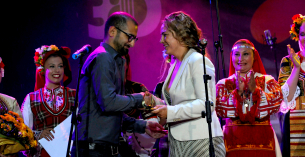 The National Festival of Bulgarian Folklore will take place from August 7th to August 9th, in the meadows of the town of Koprivshtitsa. This town is of great importance to Bulgarian history, playing a vital role in the rebellion that led to the independence from the Ottoman Empire. Many important figures in Bulgarian history were born in Koprivshitsa such as the writers Nayden Gerov and Lyuben Karavelov, and the revolutionaries Todor Kableshkov and Georgi Benkovski. The town has many preserved museum-houses from the Bulgarian revival era, making it a fitting place for the National Folklore Festival.

The festival is held once every five years, and showcases traditional Bulgarian songs, dances, music, stories, and other customs. Thousands of performers from all over the country gather here to take part in the festivities, each showing the customs from the region that they come from. In recent years, the festival has begun featuring performers from other countries as well, such as Romania, Albania, Serbia, Macedonia, Poland and even the US. The attendance of the festival is growing every year, as there is plenty to see at its various stages. It provides a great chance for tourists to see the many different cultural traditions of the Bulgarian people.

There will be a small admission fee, usually 1 BGN. Enjoy!

Previous
On August 21 through August 23rd, the picturesque village of Zheravna will become a host to the Festival of Folklore Costumes. Loads of people will gather here, dressed in the traditional Bulgarian garb, to immerse themselves in the culture of the Revival period.
View more

Every year the village of Gela, located in the mountains above Shiroka Laka, is host to an annual bagpipe festival. The festival is usually held during the first weekend of August, in a beautiful meadow of the Rhodope Mountains, and features musicians and groups from all over Bulgaria.
View more