Handed down from generation to generation, the production of carpets in our country has a long tradition. In Bulgaria there are two distinguished schools in the craft, those in Kotel and Chiprovtsi. They glorified Bulgarian carpet making, and of course the craftsmen themselves, worldwide.
Carpets produced in these areas are of a very high quality, which makes for a good local and international market.
There are two theories pertaining to the origin of weaving in Kotel.  According to the first, the business came from Chiprovtsi after manufacturers fled the city following a bloody massacre in 1688. According to the second, contacts of local merchants with George brought the craft and enabled the development of trade in Kotel.
Historical information on the Kotel carpet industry is very limited, as the majority of the town was ravaged by fire in 1894. Fortunately, the Ethnographic Museum has preserved 34 carpets, the oldest of them dating back to 1860.
The carpets impress with their beauty, vitality, and harmony of colors. It would be fair to say that their production involved talented artist who have shown their affinity for beauty in their work. Kotel carpets emanate the great spirit of Kotel women – wives, mothers, and master artists. Many companies owe their origin to the raising of sheep. Men were often in the north, in the region of Dobrogea breeding sheep and the woman remained in Kotel to look after the homes and raise children. Contact with the Ottoman Empire led to the development of trade and manufacture of carpets.
Each rug is a unique expression of spirituality, and the creative mix of aspiration towards perfection, beauty, freedom, and sadness of the oppressed Christians. That is why each carpet has its own name in accordance with the image recreated on the carpet. The carpets are adorned with images of the letter K (for Kotel), swords as a call for freedom, or objects used in Christian rituals. At the end of the 19th century, women used natural colors extracted from plants and herbs from the surrounding mountains. Today, the colors of the carpets are still sharp and expressive, unlike that of those painted with aniline dyes.
During the communist period the business was industrialized, but trade declined due to the closing of the weaving and art schools. Today, new weavers continue to perpetuate the tradition, with domestic production of carpets using old techniques.
The manufacturing techniques are presented in the Museum of Carpets, which is housed in the Galantskoto school and dates back to 1869. It is the only public building that survived the fire in 1894. The exhibition presents the evolution in the production of carpets from its inception. You can see carpets from the 18th – 19th centuries, an explosion of colors that will long stay in your memory. 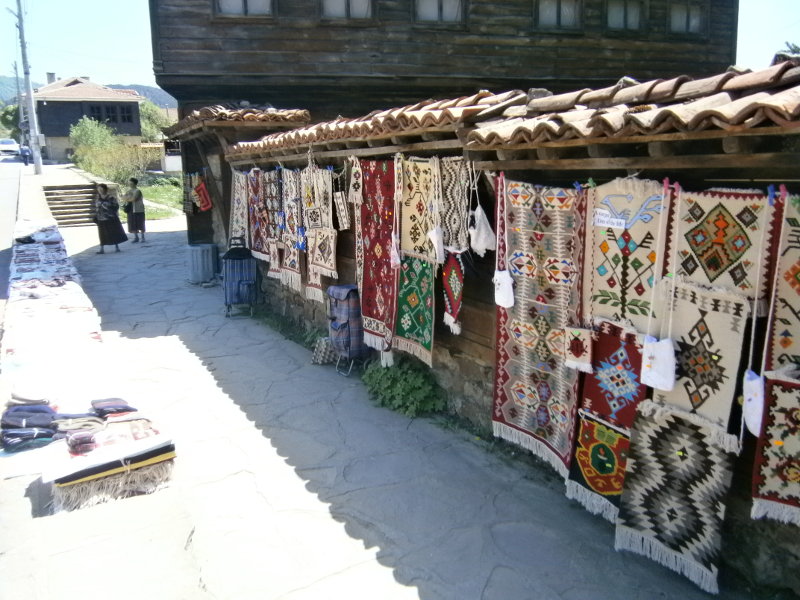